Society of St. Peter the Apostle

The goal of the Society of St. Peter Apostle is to invite individuals to support the education and formation of candidates for the Catholic priesthood in the mission lands and to support the formation of men and women candidates for the religious life in the missions. With vocations in decline, we pray for vocations and for the Society of St. Peter Apostle.

In the mission lands, dioceses struggle to keep their seminaries open and to provide the necessary formation that will lead their seminarians to ordination to the sacred priesthood and to pastoral ministry for the people of God in their local churches.

One example of the challenges faced in the mission lands can be found at St. Augustine’s Major Seminary in Mabanga, western Kenya, where 237 men are preparing for the priesthood. “We’ve run out of room, and many students are crowded into an old convent near the seminary, with offices made into bedrooms” says Father David Njuguma Kiranga, “and the existing seminarian housing, which is over 40 years old, is in desperate needs of repair and renovations.” This reality is found throughout Africa, Asia, and other mission countries, as growing numbers of men respond to vocations to the priesthood.

Each year the Society of St. Peter Apostle sends support for some 30,000 young men preparing for the priesthood in mission seminaries like St. Augustine’s – providing textbooks, technology, housing, food, and medical care.

A gift of $700 would support a mission seminarian for a year. A donation of $60 would provide a month’s support. Why not donate on an ongoing basis – a monthly gift in support of the formation of a future priest or religious would be a tremendous blessing. Any form of contribution helps ensure the continued formation of seminarians, but it would not exist were it not for the support of generous donors like yourself.

PLEASE PRAY FOR VOCATIONS AND MAKE AN OFFERING TODAY

God our Father, you will all men and women to be saved and come to the knowledge of your Truth. Send workers into your great harvest that the Gospel may be preached to every creature and that your people, gathered by the Word of life and strengthened by the power of the Sacraments, may advance in the way of salvation and love. We ask this through our Lord Jesus Christ, your Son, who lives and reigns with You and the Holy Spirit, one God, forever and ever. AMEN.

In 1889, mother and daughter — Stephanie and Jeanne Bigard — answered a desperate plea for help from the Missions. The French missionary bishop of Nagazaki, Japan, wrote to the two women asking for help to keep his seminary open because he had run out of the funds necessary to help educate these young men to serve their people as priests. The bishop just did not have the funds to train these young Japanese men whom, he judged, would make excellent priests.

The Bigards came to his assistance and started a small group for this purpose in their native Caen, France. From these humble beginnings emerged the Society of St. Peter Apostle. Within five years of sending their first donation to Japan, the Bigards, and those whom they enlisted to help, were sending funds to seminaries in India, Sri Lanka, Vietnam, Korea and China. 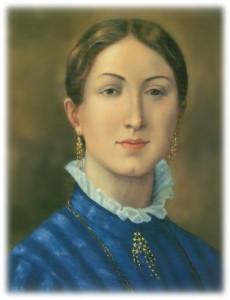 Jeanne Bigard
The goal of the Society of St. Peter Apostle then and now has been to invite individuals to support the education of candidates for the Catholic priesthood in the Developing World and to support the continued formation and training of priests, religious brothers and religious sisters in the mission lands.

In its first year, the Society of St. Peter Apostle sent assistance for some 2,700 seminarians in the Missions. Today, some 30,000 major seminarians, mostly in Africa and Asia, receive an annual subsidy of $700 per student.
On Open Seas Sisters Travel with the Word
“When the boat arrived at the island, how many children and people came out from those poor simple homes to greet them!” Sister Marissa Maraya recalled. “This was how the Lord brought us to Iling!”

A member of the Missionary Servants of the Blessed Sacrament, Sister Marissa and her community serve the poor in her native Philippines. These sisters first visited the island of Iling, a one-and-a-half hour boat ride from Mindoro. When they arrived, they found the poorest of the poor and great suffering. The week before, the villages of the island had been devastated by an epidemic disease which caused death in almost all the families. Many died because there was no doctor, nurse or treatment available. In fact, the island also had no electricity, safe water, sufficient food, or education opportunities. 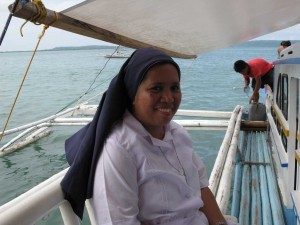 Sister Marissa Maraya
“But our Sisters’ new friends welcomed them with flowers and gratitude, and somebody quickly got some coconut milk for them to drink,” Sister Marissa said. “The people quickly took our Sisters to see their small chapel, and there they went to pray. They thanked the Lord for bringing the Sisters there, and they prayed for all who had died in the recent epidemic.” “At that moment, our Sisters decided to do something for the people here according to our little possibility – but with lots of love,” she remembered.

The sisters returned every week. In a small one-room building near the chapel – both of which were made possible with support from the Society of St. Peter the Apostle – the sisters taught village children basic school subjects while always reminding them of the Lord’s great love. They brought simple medicines, and those of the sisters who had some medical training administered routine care. There were also sewing courses for women and young mothers in the area. As time went on, the sisters started a scholarship program, helping to give hundreds of poor children from Iling the opportunity for an education. 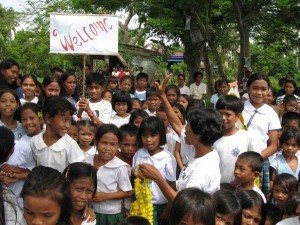 Welcome!
“Poverty remains the problem,” Sister Marissa observed. “But there have been changes, improvements, especially in education.” And the people on this predominantly Catholic island have also changed – they have discovered the beauty and joy of being missionaries themselves. By way of illustration, Sister Marissa shared the story of Nene, a young girl the sisters taught in the school they set up. The first time they met Nene, she asked the sisters to visit her mother who was sick and couldn’t leave the house. They found the woman lying on a bamboo bed, weak and tired. On that first meeting, and every time after that, the sisters encouraged her to offer her prayers and sufferings for missionary work. Before she died, she wrote this message to the sisters: “My sickness forced me to stay in bed the whole day and stopped me from caring for my children and family. For many years, I felt useless. And then you sisters brought me hope and helped me to understand that I can help the mission. During my day, I travel in my thoughts from one place on earth to another, visiting the Missions by accompanying missionaries with my prayers. I who never thought of going out of my little village,” Nene’s mother said, “have reached other continents through prayer.” 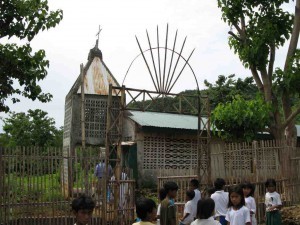 Chapel
That first journey on open seas launched new ways for a group of sisters to serve the poor – and started an island community on the journey to being missionaries themselves. Today in the missions, young men and women novices are preparing to serve their people as religious brothers and sisters. Each receives annual help for their formation through the Society of St. Peter Apostle.

Also, throughout Asia, Africa, the Pacific Islands and remote regions of Latin America, there are seminarians in formation. They have heard the Lord’s call to the priesthood but lack the financial help to complete their seminary studies. Like those preparing for religious life, these seminarians need your help.

From Supermarket to ‘Sign of Hope’
Chanakila Lubasi was once the manager of a local supermarket in his native Zambia. Five years ago, he was ordained a priest. “I want to be a sign of hope that Christ is present in the joyful and sorrowful mysteries of life,” Lubasi said as a seminarian. Reading the Gospels, he was particularly struck by the Lord’s call to “proclaim the ‘Good News’ to the whole world.” “These words,” he explained, “eventually compelled me to go to the seminary.”

Zambia is a country marked by extreme poverty and a place where the HIV/AIDS epidemic has left thousands of orphans. “My role as a priest would be to point to Christ – for strength, for hope,” observed Lubasi. A fellow seminarian Aaron Njobvu agreed. “I am becoming a priest above all to serve,” he says. “I want to be a sign of the love of God for all.” Njobvu stressed the importance of the Eucharist in his service. “In the Eucharist especially the broken connect with Jesus and His love,” he explained. “It will be my privilege to celebrate the Eucharist among my own people.” 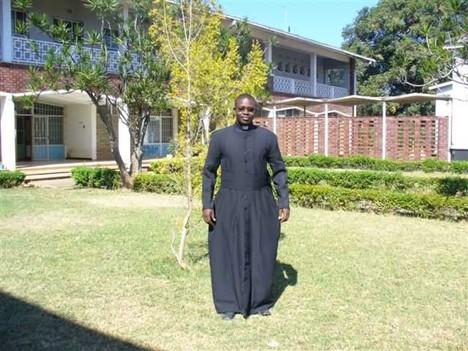 Father Chanakila Lubasi
Today, young men are preparing for the priesthood at the seminary where Fathers Lubasi and Njobvu studied, St. Dominic’s Major Seminary in Lusaka, Zambia. Each seminarian receives $700 in annual support through the Society of St. Peter Apostle – about $5 a day. Throughout Asia, Africa, the Pacific Islands and remote regions of Latin America, there are some 30,000 major seminarians in formation. They have heard the Lord’s call to the priesthood but lack the financial help to complete their seminary studies. They need your help – to be “signs of hope,” to “serve” – and to help the poor and most vulnerable in our mission family “feel the hand of the Lord on their shoulders.” Through donations to the Society of St. Peter Apostle, these young men receive that support, and the poor of the Missions are reached with the powerful, hope-filled presence of our Lord.

Pray for them; give generously to support their studies with your donation to Society of St. Peter Apostle.